Before the beginning of the 19th century, there had not been homogeneity in different guitar instruments as well as the settings in which they were played. There was a very visible class distinction between various instruments; small, lute-like instruments were used by wealthier individuals who desired to quietly play music within their drawing rooms (EB). Small groups of people would gather and enjoy food, drink, music, and company. In contrast was a larger instrument that was traditionally played by lower-class individuals. Interestingly, this instrument is more recognizably related to the modern guitar than the high-class lute. This folk instrument was commonly played with a plectrum, which is a hand-sized wooden pick that amplifies the sound of the plucked string. Increased sonority was already evident in the folk instrument, further showing the heavy influence of this class on the guitar.

The most famous guitar maker of this era (and arguably for the entire history of the guitar) is Spanish-born luthier Antonio Torres (1817-1892) (Antonio). The structure of guitar that he formed has barely changed since his guitar making years and is now the standard that all modern guitar makers adhere to. Torres designed this guitar at the prompting of guitarist Julio Arcas who demanded an instrument that could be used in a less intimate setting while still being audible (Antonio). The universal acceptance of Torres’ guitar can partially be due to his commitment to combining aspects of several guitar styles of the times in Europe into one homogenous instrument. The strengths of each instrument were thus maintained, and weaknesses were improved upon. It is thus partially due to the work of Torres that the reputation of the guitar rose. This new and improved instrument began catching the eye of composers and transcribers who desired to create new music and adapt old material for the burgeoning instrument. 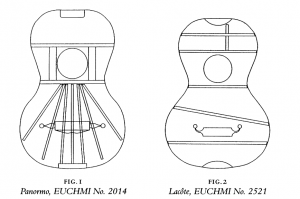 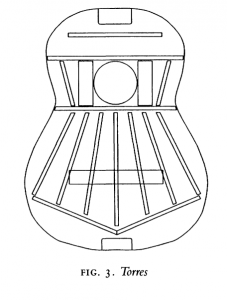 Torres’ guitars had many new and improved strengths. The 19th century saw more development in the guitar makeup than any other century. The fretboard was raised using metal enforcements which resulted in an overall louder instrument when paired with the wrapped metal strings. In order to produce a more sonorous sound, guitar makers began to support the instrument with wooden and metal internal enforcement. With tighter strings and a louder desired sound comes increased pressure on the structure of the instrument. The inside of the instrument received a fan-like wooden configuration that supported more weight than previous instruments (see Figure 1 versus Figure 2). A more sturdy and durable instrument arose from this evolution of guitar aural taste.

Image: 1890 Torres Guitar, Guitar Salon (Guitar Salon). This is another Torres guitar which boasts superior structural support. When looking at this image, it appears to be practically identical to guitars manufactured today, thus proving how Torres set the stage for the formation of guitars in the future.