The duty to take care of scientific products

“Do your duty towards me, and I will do mine towards you and the rest of mankind” (Shelley 68). 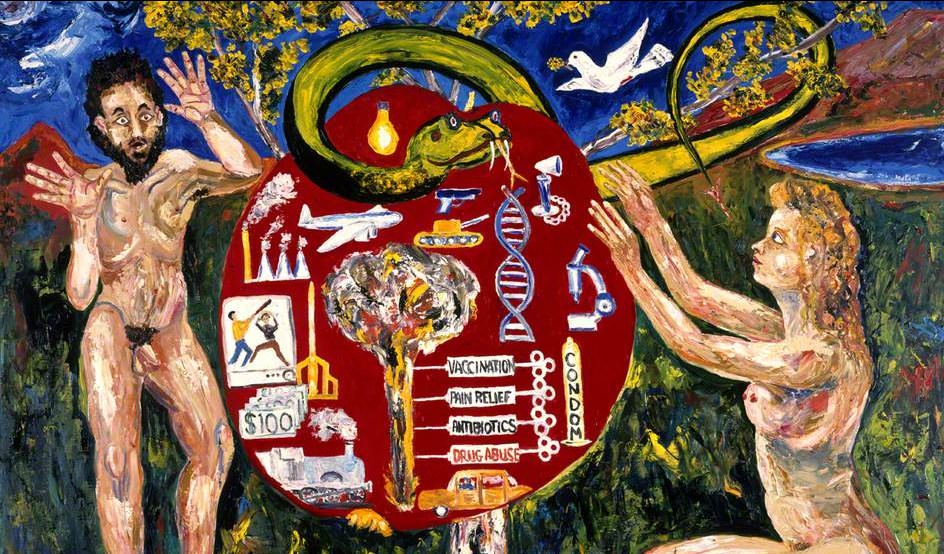 Among the elements that inspire scientific work is the drive to better humanity and to free humans from suffering and natural constraints. Victor’s ambition to “pour a torrent of light into our dark world” (Shelley 39) through an elimination of death and disease is not inherently wrong and reflects this scientific drive. Traditional and public interpretations of Frankenstein have focused upon the dangers of Victor’s scientific hubris, his violations of what is natural, and see the suffering within the novel as being caused by a science that has overstepped its bounds. As romantic literary critic Anne K. Mellor writes: “[a]ppropriately, Nature prevents Victor from constructing a normal human being: his unnatural method of reproduction spawns an unnatural being, a freak of gigantic stature, watery eyes, shriveled complexion, and straight black lips” (Mellor 239). Victor’s “unnatural” scientific methods have been illustrated as not only being inherently wrong, but as the primary reason for why he, and his creation, were fated to suffer.

This interpretation, reflecting aspects of Frankenstein’s mythic meaning, has fed into some of the modern fears over new biotechnologies. For instance, anti-GMO activists have labeled food derived from genetically modified organisms as dangerous “frankenfoods” and members of the public, and scientific community, have criticized and called biotechnologist J. Craig Venter a “Frankenstein” for his achievement in developing the first synthetic microbe in 2016 (Cohen, “The Horror Story that Haunts Science”). Like the conclusions of Mellor and other literary critics regarding Frankenstein’s work, some of the public, as evidenced by their references of the novel, are convinced that new “unnatural” scientific breakthroughs are both inherently wrong and dangerous. This interpretation of Frankenstein, furthermore, reflects some of the dominant elements of the modern Frankenstein myth: science has the power to violate, manipulate, and imitate what is natural, and, through this, will invariably bring humanity harm.

This focus upon the danger and “unnatural” aspect of science, however, is inherently dangerous and misses some of the novel’s key points. As established in a previous essay, the suffering of Victor, the monster, and others, was the result of Frankenstein’s failure in his duties as a creator. The monster makes it clear to Victor: “Do your duty towards me, and I will do mine towards you and the rest of mankind… I was benevolent and good; misery made me a fiend. Make me happy, and I shall again be virtuous” (Shelley 68). The monster was not made evil, neither by Victor nor by the “unnatural” scientific methods that were employed. Victor’s failure in fulfilling the needs of his creation prevented the monster from staying “benevolent and good” and becoming “virtuous.” Following this, the call to action for humanity should not be a rejection of “unnatural” research products such as GMO crops and synthetic microbes, but rather a drive to nurture and care for these scientific artifacts. Science and technology has become an inseparable aspect of the humanity. A blind rejection and abandonment of these emergent “unnatural” technologies will go against the themes of Frankenstein and will amount to not only collective self-hatred, but also suffering. As French sociologist Bruno Latour writes, “We confuse the monster for its creator and blame our sins against Nature upon our creations. But our sin is not that we created technologies but that we failed to love and care for them. It is as if we decided that we were unable to follow through with the education of our children” (Latour, “Love Your Monsters”).

Image: With knowledge (scientific achievement) comes great responsibility. Science, in the modern era, has been thought  analogous to the fruit of knowledge: through it, humanity is permanently changed and removed from its previous “natural” state. Even without a discussion of the benefits or consequences of science, it is clear that our current lives are intertwined with science. We create scientific artifacts, which in turn, create who we are. Following this, it is clear that there must a duty towards the care and nurturing of these artifacts, lest they lead to consequences for humanity. This view evokes one of the major themes of Frankenstein, suggested through Victor’s failure in ensuring the future of his creation: love and take care of the creations or “monsters” of science. PAINTING BY ROY YORKE CALNE VIA UK SCIENCE MUSEUM.

Latour, Bruno. “Love Your Monsters — Why We Must Care for Our Technologies As We Do Our Children.” The Breakthrough, 2012, The Breakthrough, https://thebreakthrough.org/index.php/journal/past-issues/issue-2/love-your-monsters/. Accessed 23 Apr. 2018.